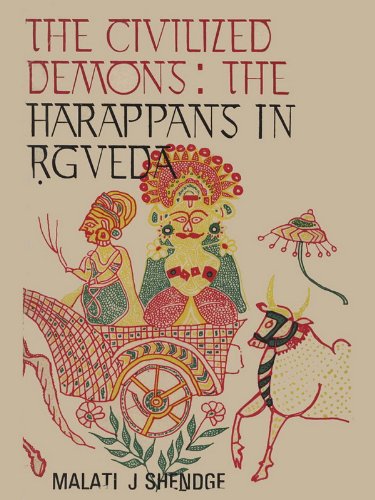 The Civilized Demons: The Harappans In RGveda
by Malati J. Shendge

Myth and mysticism have reigned supreme in Rgvedic interpretation for more than two millennia and a half. Even now, it cannot be said to be free of these. This study aims at completing the process of rational inquiry in Rgveda begun two centuries ago. It leaves behind myths and mystic experiences, simultaneously drawing the line between fact and fancy, which has eluded the scholars.

Two types of evidence - literary and archaeological - have been used. Literary evidence ranges from Rgveda to the Brahmanas. The Archaeological material covers Pre-Harappan, Harappan and post-Harappan levels. Through the interdisciplinary approach consisting of linguistic, anthropological and symbolical analysis of the material, the study emphasizes a consistently rational attitude to the study of Rgveda. In fact, as the study amply demonstrates, the fresh air of reason may change our understanding of Rgveda and also of ancient Indian history. Rgvedic hymns from this viewpoint may probably prove to be a valuable source of information of the historical events, which led to the downfall of the pre-Aryan Indus civilization. This is correlated to the archaeological material available on the Harappan sites.

This is the first investigation of its kind and the conclusions of the study are no less original. Besides establishing the rationality of the Rgvedic narratives, it shows the events and their agents to be historical in the light of available archaeological material.

The theory and the approach hold out a promise and may transform our understanding of these ancient compositions from myth to history.

Malati J. Shendge, born in 1934, took her Ph.D from University Of Delhi in Esoteric Buddhism popularly known as Buddhist Tantrism. She studied Sanskrit and Pali languages up to post-graduate level and later acquired knowledge of Tibetan language and literature so very essential for the work on Buddhist Tantras. She was awarded a fellowship of the University for the period 1960-64.

A widely traveled person, she studied Japanese Esoteric Buddhism as Government of Japan scholar in University of Tokyo. On her return to India she worked at Indian Institute of Advanced Study, Simla, and later as a fellow of Indian Council of Historical Research, New Delhi. She is currently placed in Jawaharlal Nehru University, New Delhi.

She has several works to her credit published in internationally acclaimed journals. She has studied Buddhist Tantrism from literary, philosophico-religious, and anthropological points of view, and has acquired knowledge of German and French, Buddhist, Chinese and Japanese languages. She remains by far a lone figure on the Indian academic scene working on Esoteric Buddhism on scientific principles.