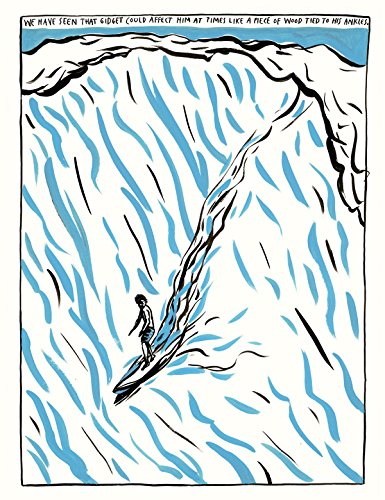 Limning a dizzying array of topics with his distinctive combinations of image and text, Raymond Pettibon has created a vocabulary of characters and symbols that reappear consistently if enigmatically across his oeuvre, ranging from baseball players, atomic bombs, and railway trains to the cartoon Gumby. But the most poetic and revealing of Pettibons symbols may be the surfer, the solitary longboarder challenging a massive wave. In his surfer works, viewers ride along with a counter culture existentialist hero who perhaps is the artists nearest proxy. This revised and expanded edition of Raymond Pettibon: Surfers 1985 2015, the first printing of which sold out almost immediately upon publication in 2014, features twenty additional works, as well as new color separations and jacket design. Nearly all the works included in this volume depict an ocean roiling with chaotic swells, accompanied by non sequiturs, quotations, and fragments of poetry in the artists handwriting. Organized chronologically, the publication traces Pettibons prolific output of his surfer series, from early small-scale monochrome India ink drawings to numerous examples from the 1990s when the artist introduced color, culminating with his recent large-scale works, some of which were executed directly on a wall. Rounding out the publication is a poetic meditation by the writer Carlo McCormick, which captures the essence of Pettibons surfing works: Riddled with enigma, Raymond Pettibons art speaks little about himself the artist, preferring rather to address more central questions on the nature of self, but he tells us this, Some things (sea foam, for instance) cannot be drawn at all, but only surfed, or again, All this must be either surfed or painted.

The themes of solitary contemplation and the poetry of nature are ever-present in the sweeping and vibrant depictions of the waves and the surfers who ride them, arguably one of the artist's most influential muses.--Patrick Galizio "essentialhommemag.com "