Legions in Crisis: The Transformation of the Roman Soldier - 192 to 284 por Paul Elliott 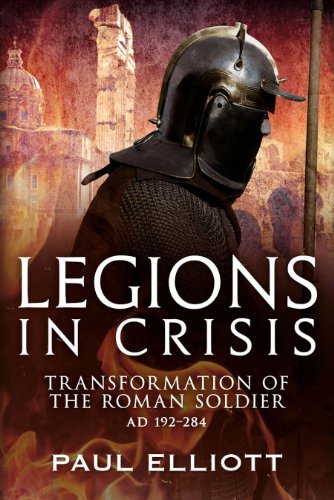 Titulo del libro: Legions in Crisis: The Transformation of the Roman Soldier - 192 to 284

Paul Elliott con Legions in Crisis: The Transformation of the Roman Soldier - 192 to 284

The third century AD was a turbulent and testing time for the Roman Empire. A new and powerful foe in the east had risen up to challenge Rome directly. Barbarians on the northern frontiers were now more aggressive and more numerous than before and internally the population of the empire had to contend with rampant inflation and a series of terrible plagues. Unfortunately, the chaos became magnified by a lack of continuity on the imperial throne. The army had real political power in the third century, making and unmaking emperors as it saw fit. It had been aided in this by Septimius Severus, the African emperor who had won out in the civil wars following Commodus' assassination. He increased the army's pay and granted other privileges. While the army gained rapidly in size, stature and political savvy during the reign of Septimius Severus, it also accelerated a material transformation. Armour, shields, helmets, swords and javelins all began to be replaced with new styles.Legions in Crisis looks closely at the new styles of arms and armour, comparing their construction, use and effectiveness to the more familiar types of Roman kit used by soldiers fighting the earlier Dacian and Marcomannic Wars.What did this transformation in military technology mean for the tactical choices used on the battlefield? Although the outcome had looked in doubt, the army and the empire it protected weathered the storm to emerge into the fourth century fully able to tackle the challenges of a new age.


PAUL ELLIOTT has a degree in ancient history and archaeology and writes books on military history. Previous titles include The Last Legionary, Warrior Cults and Vietnam: Conflict & Controversy. He has also written articles on Roman military history for Ancient Warfare magazine. Paul has been involved in historical reconstruction for the past decade, in particular he has experimented with bronze casting, flint knapping, slinging and the fabrication of Roman shield types. He lives in East Yorkshire with his wife, Christine and son, John.