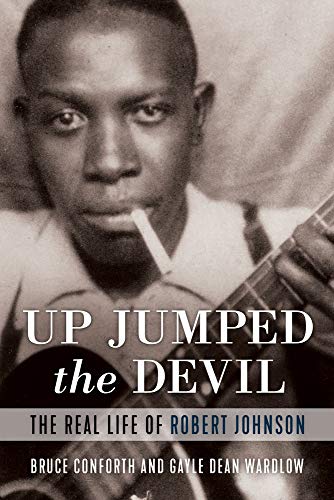 Titulo del libro: Up Jumped the Devil: The Real Life of Robert Johnson

Reseña del editor Robert Johnson’s recordings, made in 1936 and 1937, have profoundly influenced generations of singers, guitarists, and songwriters. Yet until now, his short life—he was murdered at the age of 27—has been poorly documented. Gayle Dean Wardlow has been interviewing people who knew Johnson since the early 1960s, and he was the person who discovered Johnson’s death certificate in 1967. Bruce Conforth began his study of Johnson’s life and music in 1970 and made it his mission to fill in what was still unknown about him. In this definitive biography, the two authors relied on every interview, resource, and document, much of it material no one has seen before. This is the first book about Johnson that documents his lifelong relationship with family and friends in Memphis, details his trip to New York, uncovers where and when his wife Virginia died and the impact this had on him, fully portrays the other women Johnson was involved with, and tells exactly how and why he died and who gave him the poison that killed him. Up Jumped the Devil will astonish blues fans worldwide by painting a living, breathing portrait of a man who was heretofore little more than a legend. Biografía del autor Bruce Conforth, former professor of folklore, blues, popular culture, and American history at the University of Michigan, was the founding curator of the Rock and Roll Hall of Fame. He lives in Ann Arbor, Michigan. Gayle Dean Wardlow is a highly regarded blues historian who has amassed one of the world’s largest collections of prewar blues records. His book Chasin’ That Devil Music is a classic of blues literature. He lives in Pensacola, Florida.