The Other Side of the Coin: The Queen, the Dresser and the Wardrobe por Angela Kelly 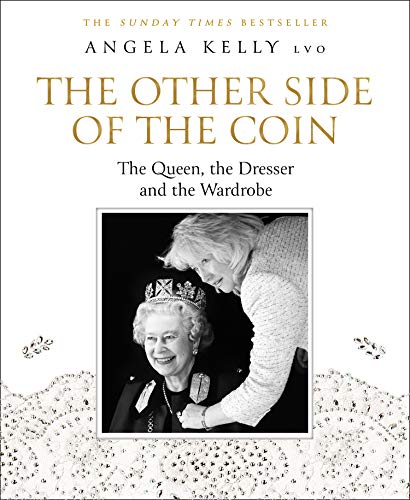 Titulo del libro: The Other Side of the Coin: The Queen, the Dresser and the Wardrobe

Angela Kelly con The Other Side of the Coin: The Queen, the Dresser and the Wardrobe

Críticas ‘For the nearly seven decades of her reign, Her Majesty The Queen has used clothing to create a powerful visual identity that transcends fashion and has made her perhaps the most readily identifiable person on the planet. Angela Kelly, building on the work of the great designers and milliners who have worked with Her Majesty through the years – including couturiers Sir Norman Hartnell, Sir Hardy Amies, and Ian Thomas, and milliners such as Simone Mirman and Freddy Fox – brings her own imagination to bear on an iconic ‘uniform’ that suggests continuity and tradition, and ensures that the wearer is always the most visible person in a room or a crowd.’– Anna Wintour,Vogue‘Fascinating book’– HELLO!‘The book is a trove of warm and insightful anecdotes’– Daily Mail‘Angela Kelly shares fascinating and charming anecdotes’– Good Housekeeping‘Life with the Queen uncloaked. It is the Queen, and Angela’s photographs of her, that make this anecdotal book unique. The pages are full of small pranks and light-hearted fun. The Other Side of the Coin lifts the royal curtain without offending anyone. *****’– Daily Express‘Reveals the inner workings of the royal wardrobe…this is a book that is as much about love as clothing. Kelly knows what it is like to walk in Her Majesty’s shows – she breaks in the monarch’s new pumps to make them comfortable after all…Kelly’s commitment to making the Queen’s life rings out from every page. The level of detail in this book occasionally stuns. The Poppins-like staunch and breezy pronouncements that are scattered through this volume are very likeable…you cannot help wondering what it would be like to have your own Miss Kelly looking out for you, anticipating your every need, devoted to your ventures’– Financial Times Reseña del editor ‘Full of gems … Angela Kelly is a jewel in the crown’Daily Telegraph‘Entertaining and beautifully illustrated’The Sunday Times‘For real intel, [The Crown] can’t come close to The Other Side of the Coin by Angela Kelly’The New York Times‘Fascinating book’HELLO!‘The book is a trove of warm and insightful anecdotes’ Daily Mail‘Angela Kelly shares fascinating and charming anecdotes’ Good HousekeepingFirst print run features a specially designed cut-down dust jacketWhen Angela Kelly and The Queen are together, laughter echoes through the corridors of Buckingham Palace.Angela has worked with The Queen and walked the corridors of the Royal Household for twenty-five years, initially as Her Majesty’s Senior Dresser and then latterly as Her Majesty’s Personal Advisor, Curator, Wardrobe and In-house Designer. As the first person in history to hold this title, she shares a uniquely close working relationship with The Queen.In The Other Side of the Coin, The Queen has personally given Angela her blessing to share their extraordinary bond with the world. Whether it’s preparing for a formal occasion or brightening Her Majesty’s day with a playful joke, Angela’s priority is to serve and support. Sharing never-before-seen photographs – many from Angela’s own private collection – and charming anecdotes of their time spent together, this revealing book provides memorable insights into what it’s like to work closely with The Queen, to curate her wardrobe and to discover a true and lasting connection along the way.‘The book documents the unique working relationship between Her Majesty The Queen and the woman who has been her Personal Assistant and Senior Dresser for more than two decades: Angela Kelly. It gives a rare insight into the demands of the job of supporting the Monarch, and we gain privileged insight into a successful working relationship, characterised by humour, creativity, hard work, and a mutual commitment to service and duty. Angela is a talented and inspiring woman, who has captured the highlights of her long career with The Queen for us all to share.’ – Samantha Cohen, Assistant Private Secretary to The Queen (2011–2018) Ver Descripción del producto